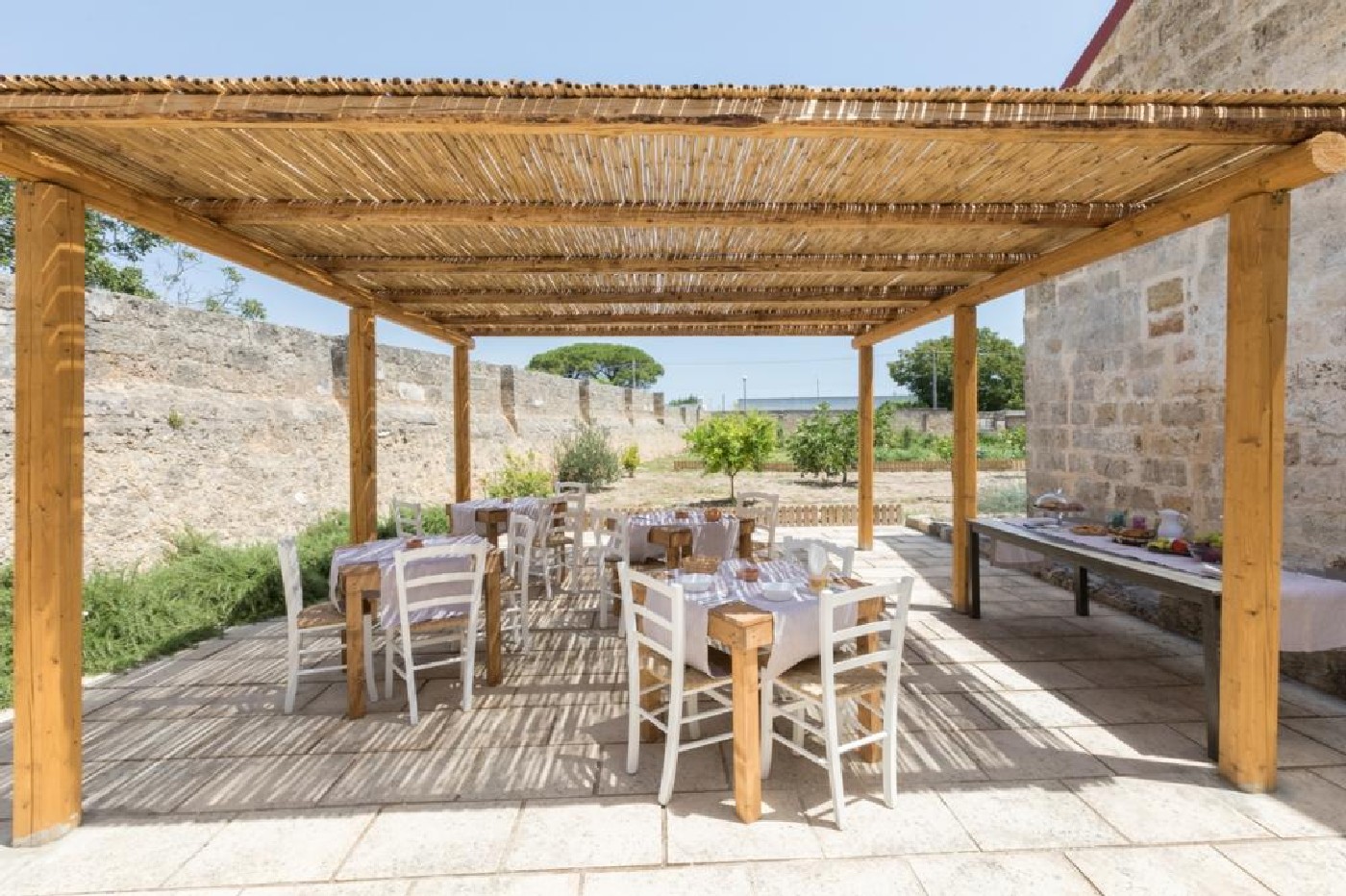 Description
Il Giardino del Priore is a rural dwelling that is part of an old wine factory, located in one of the most characteristic corners of the town of Ugento, in the province of Lecce.The building, considered a significant example of industrial archeology in the lower Salento, was recently renovated and used for rural tourism (landowners).The accommodation is located near the ancient village of the city, in an area of considerable historical and artistic interest and in a strategic position, 5 kilometers from the splendid beaches of the Ionian Sea and easily accessible from Lecce - Gallipoli - S Maria di Leuca.A bit of historyThe complex, formerly a Celestine convent, represented in the ancient maps of Ugento de Silva and Pacichelli in 1703, is characterized by the presence of valuable elements that emphasize the historical importance and the typicality of the structure, such as the church of the Madonna delle Grazie, part of a Basilian grain, the remains of the ancient hortus conclusus and the old wine factory.The contribution of the Basilian monks to the development of agronomic techniques and in particular to the conservation of oenological traditions among the local populations has been remarkable. The monasteries became the center of economic rebirth and fueled the rise of granaries, small centers erected in the possessions of a monastery.Because of the struggles between Greek rite priests and Latin rite priests, the Basilian monks were forced to abandon the monastery and the properties were bought by the Celestines. The Priory of the Celestines existed in Ugento until 1616. In that year Pope Paul V abolished some monasteries and among others that of Ugento, whose property was transferred to the Priory of Mesagne. In 1807 King Joachim Murat suppressed the religious order and confiscated the property.The "Garden of the Prior", in the meantime passed under the administration of the Bishopric of Ugento, was not spared by the provisions issued by the State in the two-year period 1866-1867 for the suppression of religious corporations and the liquidation of the ecclesiastical axis.Countless assets belonging to ecclesiastical bodies were acquired ex lege by the national office of properties and sold for public attraction.On 5 March 1876 the building was purchased by Mr. Vito Provenzano of Matino. Moving to Ugento in 1878, continuing his activity as a surveyor, Vito Provenzano turned the complex into a distillery, taking care of producing high quality wine with tireless efforts and expertise. On the occasion of the International Exhibition of Industries and Labor in Turin in 1911, the company Vito Provenzano and the children received the "Gold Medal Diploma".The Provenzano family has always kept the property together with that of the church annexed to the former monastery, the subject of a recent conservative restoration and intended for public worship. The ancient church, known in the popular language as the church of the Prior, adorned with an altar dedicated to the Madonna delle Grazie with a painting of the same, is a destination for guided tours to ensure the public enjoyment of the property and the organization of cultural events.Il Giardino del Priore is a suggestive dwelling able to offer a unique opportunity of hospitality to visitors looking for a direct contact with nature, a stone's throw from the enchanting crystal clear waters of the tourist port of Torre San Giovanni.Guests have six rooms of four different types:Classic: double / twin roomDeluxe: double / twin roomJunior suite: family / quadruple roomSuperior junior suite: family / quadruple roomDeluxe rooms and junior suites have a living area with a sofa bed.All rooms overlook the ancient garden and are equipped with private bathroom, mini fridge, air conditioning and independent heating.Outside there is a large solarium and relaxation area.The structure is able to offer the necessary comfort to the disabled.Small pets are welcomeSERVICES INCLUDED: Reception; Welcome drink; Reserved parking; Fridge bar Color TV; Hairdryer; Conditioned air; Wifi. Daily rearrangement; Bed linen change: 3 days; Bathroom linen change: 2 days; Breakfast. EXCLUDED SERVICES: Lido equipped beach; Laundry / ironing service; Excursions and guided tours; Karting; Horse riding; Bike and car rental; Transfer; Massage; Hair dresser; SUPPLEMENTS: Cot: €. 5.00 per day;